How to Clone GPT UEFI Disk to SSD and Make It Bootable?

How to clone UEFI/GPT disk to SSD or larger hard drive without converting partition style? Just scroll down to get details, and no any reinstallation required.

Recent computers use built-in UEFI main board instead of BIOS. UEFI system adopts hard drives initialized with GPT partition style, which allows users to use disk space beyond 2TB, supports faster booting process and more security features etc. Meanwhile, Intel plans to remove legacy BIOS by 2020 and it may be a trend in the near future.

Now, let's get the basic. Both UEFI and BIOS are firmware interface for computers, acting as a middleman between firmware and operating system. But the UEFI boots faster than BIOS thanks to EFI system partition. This partition stores all information about initialization and startup in the .efi file, as well as boot loader programs for the operating system, so UEFI disk can directly boot the operating system and save the BIOS self-test process.

In BIOS, it will load and wake up the computer's hardware components, then use boot loader to initialize Windows. And it must run in 16-bit processor mode, and only has 1MB space to execute, which make the initializing and booting process much slower.

Although UEFI disk has more advantages of BIOS disk, you still need to clone disk UEFI in some cases. Here are the main reasons why you need to clone EFI disk.

Whatever the reason, you definitely prefer a quick and easy way to clone UEFI disk without the need of reinstalling Windows and programs. To make it, UEFI disk cloning software is needed and AOMEI Backupper Professional is recommended here.

AOMEI Backupper Professional is powerful disk cloning software that can do UEFI disk clone as boot drive or data drive. Meanwhile, you don't need to convert MBR disk to GPT, or convert GPT to MBR before cloning because this software will take care of this process automatically.

What’s more, the cloning process will be running in the background and it won’t interrupt you using the PC. Check the next part to see how to clone UEFI hard disk.

You can use AOMEI Backupper Professional to clone UEFI disk to SSD with the following steps, even for a novice. This software has a very intuitive interface, so users can understand it easily and quickly.

1. Launch AOMEI Backupper Professional, click “Clone” and “Disk Clone” in order. If you intend to transfer OS to another drive, you can use “System Clone” as instead.

2. In the next screen, tap the original UEFI/GPT disk to mark as source disk and click “Next”. 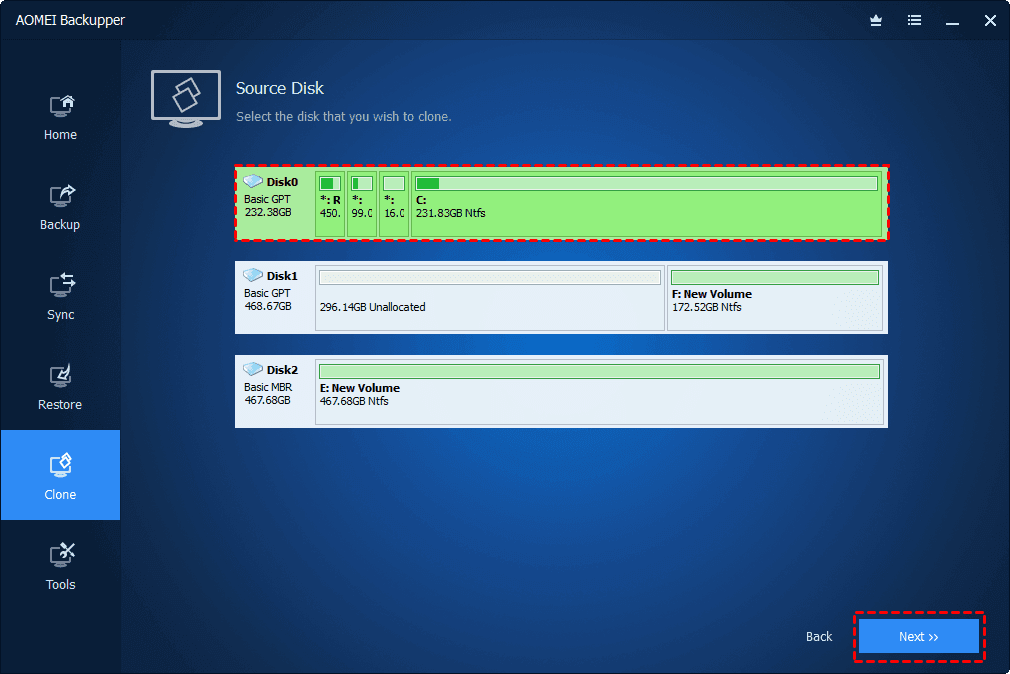 3. Select the SSD you want to clone to as the destination disk and click “Next”. 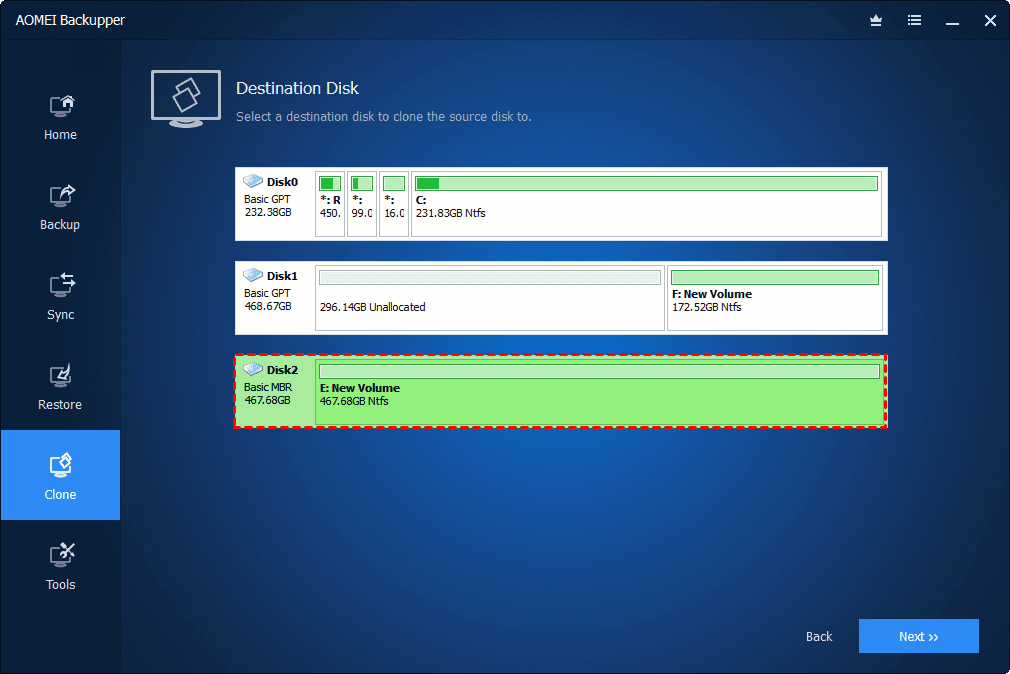 During the process of cloning GPT UEFI disk, this software will ask you if you want to convert the destination disk type to source disk, just click "Yes" to continue. Also, if you choose nothing, it will convert automatically. 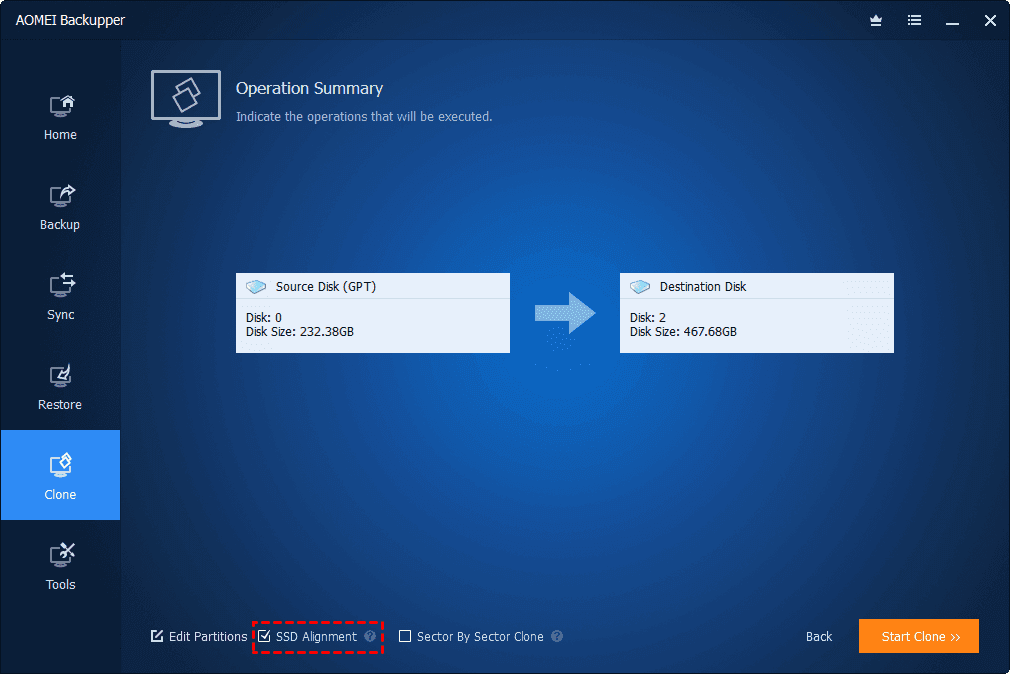 ✎ Notes:
⚘ You could click Edit Partitions at the bottom left to fully use the space on the destination SSD if you are cloning disk to larger disk.
⚘ Sector By Sector Clone will helps you clone all sectors on the source disk, even blank sectors, used sectors and bad sectors, and time will be much longer; Uncheck this option will skip bad sectors be default, which is useful to clone failing hard drive.
⚘ To boot from cloned SSD, you need to go to BIOS and set boot priority of SSD, finally press "F10" to save changes and start your computer normally.
⚘ This version only supports cloning UEFI disk in Windows 10/8/7/Vista/XP. If you are using server-based operating system, such as, Windows Server 2008/2012/2016/2019 and its R2 version, AOMEI Backupper Server will be a better choice.

Honestly, AOMEI Backupper Professional is a great disk clone software to clone UEFI disk in Windows 10/8/7. With it, you don't need to convert partition style ahead of time and reinstall Windows manually. Give it a try and you will not be disappointed.Click to tweet

That’s all for how to clone UEFI disk in Windows 10/8/7 to SSD. AOMEI Backupper stands out, because it solves many headache disk cloning problems for users, such as, clone hard drive with different sizes, clone disk with different partition styles, and cloned hard drive shows wrong size, etc.

Surprisingly, AOMEI Backupper is also taken as a backup and restore software that can be used to upgrade disk or get better performance. The difference is, backup only works after you restore it to target drive.

In a word, no matter whether you want to clone UEFI disk or backup it, AOMEI Backupper Professional is a great choice. It aso has built-in command line for advanced users.

You May Also Like
Best UEFI Disk Imaging and Cloning Software
How to Clone GPT to MBR SSD? (Worry-Free Tutorial)
Best Way to Clone UEFI Disk to SSD Easily in Windows 7/8/10
How to Clone a GPT Disk via Clonezilla Step by Step?