Create Bootable CD/DVD/USB Based on Windows PE or Linux

It is always recommended to backup Windows drivers so as to restore them and insure a working computer after recovering system. Or you may download the magic tool Driver Talent for Network Card which is able to download and install network drivers without internet connection in case of no internet after system recovery.

Create bootable disc will help you boot your computer successfully. The bootable CD maker AOMEI Backupper supports creating two kinds of bootable CD or USB Flash Drive. One is Linux boot disc, and another is Windows PE boot disc. The former one can be created straightway, while the latter one may require installing Windows AIK kit in your operating system in advance. Linux boot disc has several drawbacks. For example, some hardware does not support it, such as, hardware RAID; and some functions of the software can not be used. Therefore, we strongly recommend creating Windows PE bootable CD first. The comparison of the available functions between these two types of disc is as follows.

When making a Windows PE bootable CD, the free backup software - AOMEI Backupper will check out whether your operating system meets the corresponding requirements. For instance, is it necessary to install Windows AIK? If it does, this software will provide corresponding notices. If your operating system is Vista or higher version of OS, such as, Windows 7/8/2008 R2/2011/2012, usually you can directly create a bootable CD without installing Windows AIK.

Here come the steps of how to create bootable disc with AOMEI Backupper.

Step 2. In the pop-up window, choose "Windows PE-create bootable disc based on Windows PE" option, and then click "Next".

Step 3. If your system installed on a GPT disk, you will see two options below: 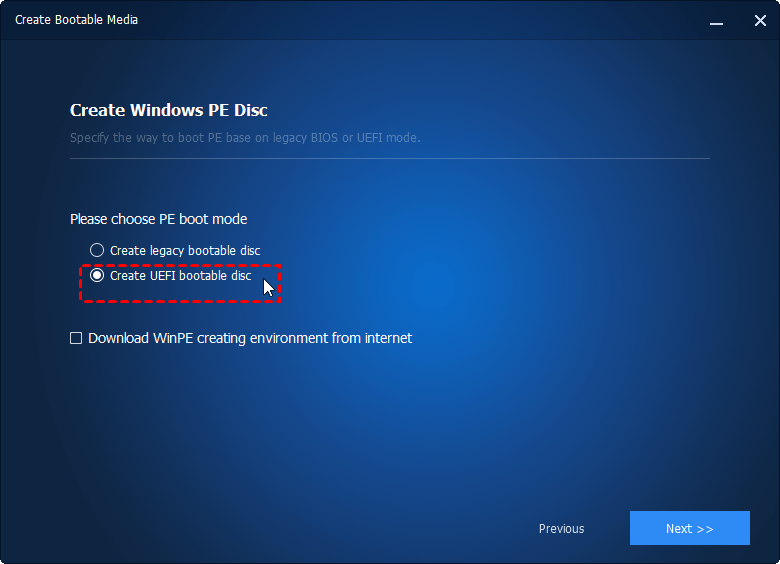 Usually, we suggest you to keep the first default option. If you need to use the bootable media on multiple computers of different hardware configruations, (such as some computers do not support UEFI boot), you can select the second option for better compatibility. 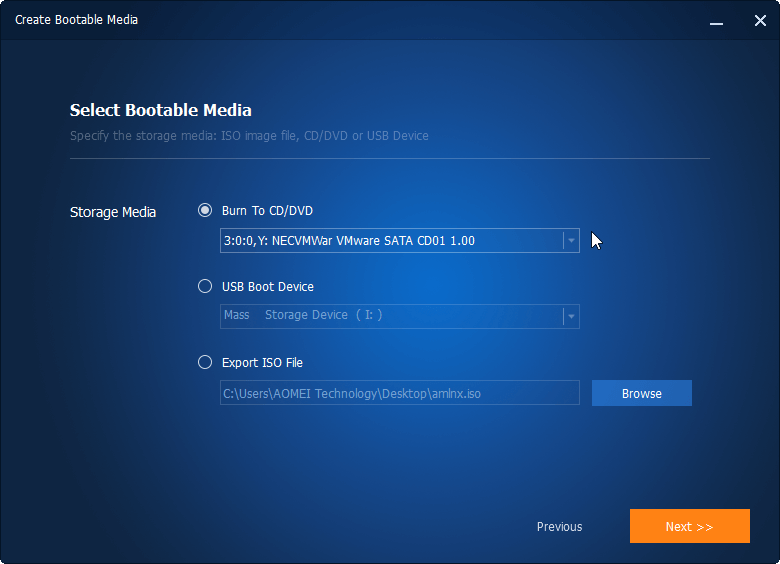 Step 5. When the operation is done, just click "Finish" to exit the interface.
Here you have already made a bootable CD. Then, you can reboot your computer, and set the CD-ROM as the first boot device in BIOS settings and test if your computer can boot from the disc. Then, when something bad happens, you can perform windows 10 system image restore to different computer, even with dissimilar hardware.

If you do not have a CD/DVD, but a USB flash drive, you can use a USB drive to replace CD/DVD, to create a bootable USB drive. The making way is the same as creating a bootable CD. You just need to see the following screenshot, select "USB Boot Device" and click Next. 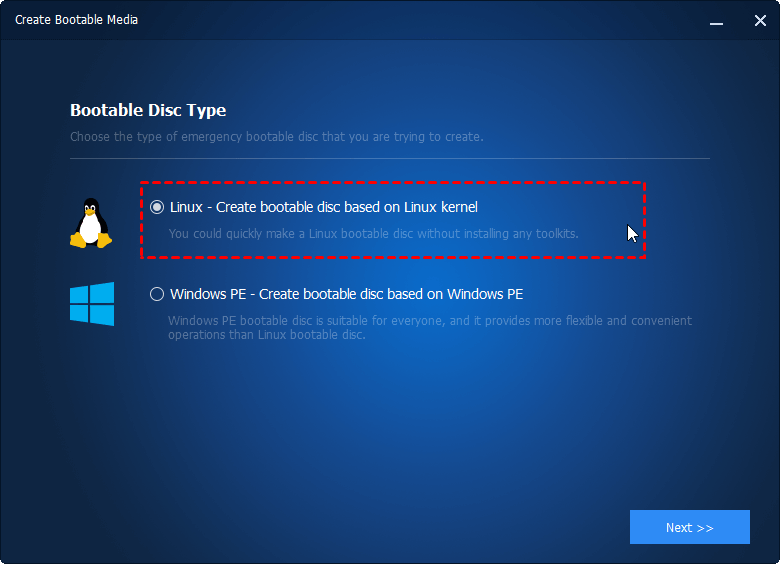 During the process of making Linux CD, if you do not possess a CD, AOMEI Backupper allows you create a bootable USB drive. The only requirement is that, when choosing the bootable media type, select the USB Boot Device. Then you can boot the operating system from the USB disk to do the recovery operations.

Note: Linux bootable media does not support for EFI/UEFI boot, if your computer boot mode is UEFI mode, you need to enter into BOIS to change the BIOS boot mode from UEFI to Legacy Boot Mode like the following snapshot (you may also learn how to change the setting by referring to the manual of your motherboard).

First, select "Create Bootable Media" option under the "Utilities" item. Then, in the next window, select "Windows PE" or "Linux" item, and click "Next" until you get to this interface. Then, select the "Export ISO file" option, and then click "Next". 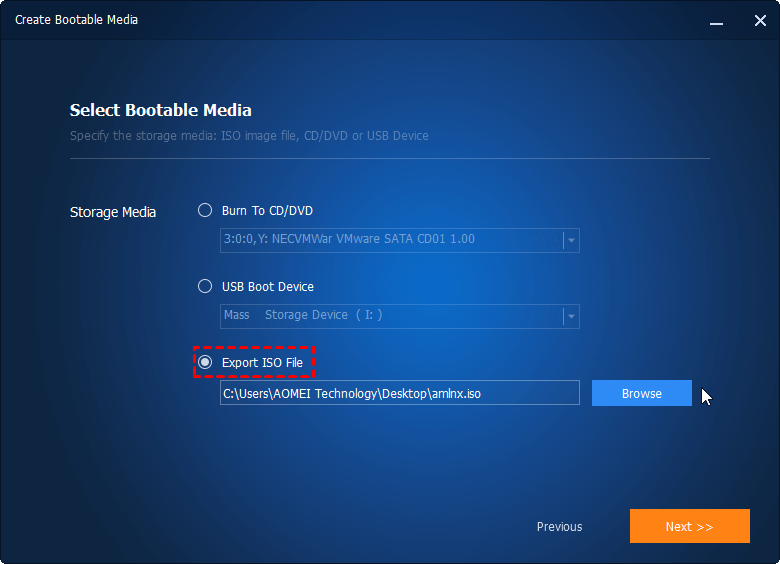 At last, click "Finish" when the operation has been done. 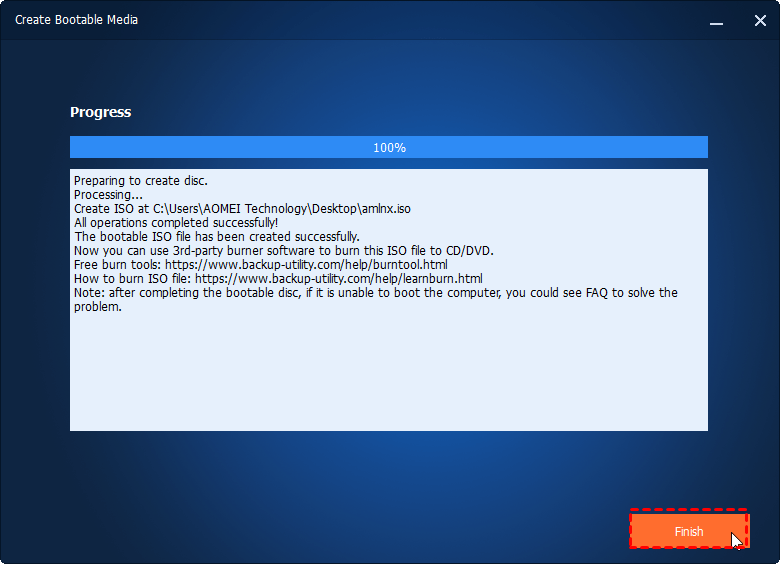 Now, after creating the ISO file, you can easily burn ISO to CD or USB with burning tool and follow the tutorial how to burn ISO file to CD/USB to burn this ISO file. Also, you can complete this task with the Windows 7 integrates built-in burning utility by right clicking this ISO file > Open With > Windows Disc Image Burner.